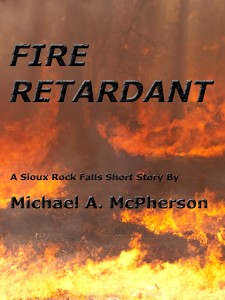 Forest fires regularly sweep through Northern Ontario during the summer months, and if a town is in the way it has no chance.  In 1979 the town of Cobalt, Ontario near Lake Tamiskaming lost a good chunk, with only the church, a few homes and a decaying strip plaza spared.

But when the Ministry of Natural Resources guy threatened to draft the bridge crew I was with to fight that forest fire, I got to thinking, talking with locals and hearing legends of fires past.  After a few more beers the short story Fire Retardant found a comfortable place in my brain.  It stayed there for years before I finally released it for Storyteller Magazine.

Fire Retardant is now available on Amazon.com for the Kindle.  This short story first appeared in Storyteller Magazine in their fall 2004 edition.

Soon I’ll have it for all e-pub format readers as well.