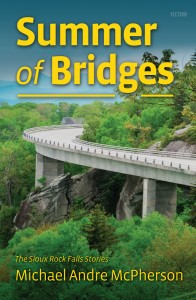 Some authors have this milk-cow attitude to their novels. They warn that if you give them away, you’ll lose sales because no one will buy them if they can get them for free. I’ve heard at least one established and successful author state that you should never give your work away. Yet, that same author did just that with his first novel when he was starting out.

When you’re a newbie author you’ve got to build a following, and for that you need fans. They don’t appear magically out of the woodwork, they have to discover you. So I’m going to give it away for free today.

Summer of Bridges is a collection of award-winning short stories that were first published in Storyteller Magazine (alas, now defunct) between 2002 and 2008. They’re a comedic romp through one coming-of-age summer for Kenny, a seventeen year old who is nothing but trouble for his widowed mother. To save him from pot-smoking friends, she sends him to work with his uncle’s bridge painting crew, five hundred miles from home and so far north that there are no roads that don’t head due south. Kenny has to learn to fit in with a construction crew of ex-cons, become comfortable working at high heights, survive forest fires and even gets involved with a murderer.

I’ll be curious to see how this experiment in free works out. What I want more than anything as an author is for people to read my work and enjoy my stories as much as I do. I developed some faithful fans when the stories first came out, and I hope to add more with this promotion.

UPDATE: I wrote this blog last night before the promotion went live. I just checked my sales and BAMM! Holy Downloads, Batman! By 9:00 this morning nearly fifty have flown out the door, including a bunch in the UK and even one in Germany. We’re looking into how people are finding out about this freebie because I’m flabbergasted.