Ok E-reader Haters: You Can Laugh at Me 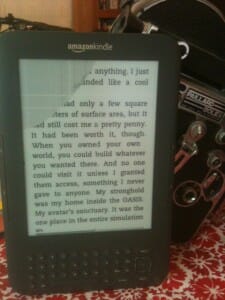 My broken Kindle with my spring wound 16mm Bolex film camera in the background.

I love my kindle, but I’ve heard all the complaints from people who prefer paper books:

2) If you drop them in the tub they’re ruined

3) They’re no cheaper than paper.

I have rebutted some of those complaints before, but here’s a quick run down:

1) Smell? Really? Printer’s ink and mould and the scent of dead-pulped trees is essential to the reading experience? Hey, I should patent a spray equivalent to a car air fresher that provides the scent of an old hardcover from the library.

3) That’s because of the evil agency pricing where Apple teamed up with the big publishers to force up the price of e-books. The Department of Justice has been all over those corps to end agency pricing, charging them with colluding to price fix. If you’re daring, there are a lot of indie-pubbed e-books that are well worth the $2.99. Check the reviews and read a sample before you buy, or if you hate the book, return it. Amazon lets you do that.

But here’s where you can all laugh at me. Last week I was having a wonderful time at a cottage. The sun shone and the kids swam. I went canoeing, tubing on the banana boat (I kid you not. It was called the “banana boat”) In the evenings, I sat in the screened porch and read using my Kindle. It was great to have a huge library at my fingertips in a light small case.

But alas, I was 2/3 through the novel Ready Player One (which is steeped in 80s video game nostalgia) when disaster occurred: I dropped my Kindle and it landed corner down. You can see the result above. A quarter circle of e-ink is toast–totally blank. I tried increasing font size to see if I could guess the words in the first few sentences of each page, but it was hopelessly dead.

I’ve dropped my Kindle before so I guess I’d become somewhat cavalier about how much abuse it could handle, but it was the way it landed that killed it.

Panaflex Platinum. Top of the line in the 90s.

Back in my days as a camera assistant, a focus puller dropped a Panaflex camera. It fell one single solitary foot onto concrete when the handle released unexpectedly because it hadn’t been properly locked to the top. The camera was practically a write off, the gate for the film was a wreck. Two weeks later three cameras were hit head on by a car and (other than some matte box damage) all survived because they flew through the air and landed on the magazines in the soft mud. It was all about how they hit the ground.

The goods news was that I had my laptop with me, so within I few clicks I downloaded the Kindle reading app for MAC, signed into my account and kept reading from where I left off. Thank you Amazon for not leaving me without a book to read at the cottage. Technology is still great.

Oh yes, I am buying another Kindle. Although I’m tempted to get a Kindle Fire, I think I’ll stick with the straight e-reader. I want it for books.