The Day John Grisham and I were on the Same Page 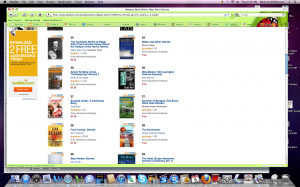 John and Me on the Same Page

My first published shorts stories were in a small Canadian magazine called Storyteller–alas, now extinct. Since Storyteller promised stories that “could only happen in Canada” I know these stories won’t necessarily have world wide appeal, although if you like coming-of-age and you want to know what it’s like on the northern frontier, these might still be the stories for you.

So I wasn’t surprised when my anthology, Summer of Bridges, a collection of all the Sioux Rock Falls stories that were published between 2001 and 2006, didn’t rocket to the top of the bestseller rank on Amazon. After all, anthologies don’t sell well in print, let alone as eBooks, and most people think of Canada and yawn, including Canadians. Don’t get me wrong, that’s why it’s a wonderful country. Afghanistan has a deep and interesting history, but I sure as hell wouldn’t want to live there right now.

But then came my first magical promotional day, when I decided to see if I could just give it away. I love these stories, and while they are all inspired by my own experiences in the Great White North, they are fiction. As I had to say to one friend of ten years after he read the stories, “No, I didn’t participate in the burning of a giant wooden moose. I’d have mentioned that at some point during the last decade.”

To my surprise the anthology flew off the electronic shelves, hundreds downloading in day. But the best part was when John Grisham and I appeared on the same page. It turns out he wrote an anthology called Ford County: Stories. By fluke that day they happened to be ranked 28 in Amazon’s paid short story category. Summer of Bridges, because of all those free downloads, was ranked 27 in Amazon’s free short stories. Okay, I know, Grisham’s anthology is going for $7.99 and mine is free. His has 235 reviews and mine has 4. We’re not exactly in the same class, but hey, my book would never appear alongside his in a bricks-and-mortar book store.

I love the internet.

So today I’m doing another free promo day for Summer of Bridges. Take a chance and see if the Great White Canadian North doesn’t surprise you. It actually is an interesting place. And I did live there. Who knows, maybe one more time I’ll briefly end up beside my buddy John.