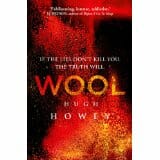 Last night Howey gave us some insight into the journey that took him to this fantastic success. Here’s a quick list of some of the things I learned:

Howey also explained the work he and others did to determine author earnings, which showed that there are people making a living from their self-published writing even if they’re not million selling outliers like him.

His concluding advice to writers is write what you enjoy, don’t wait for miracles, just keep writing, and dare to hope that you’ll be surprised one day.