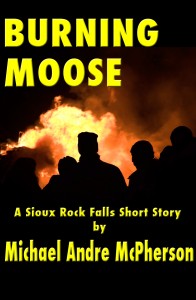 I’ve gone nuclear on my Microsoft Word document; I’ve loaded Mobipocket creator to the PC side of my MAC, since Mobi doesn’t make a MAC version.  Finally, I photoshopped  the spiffy new cover you see on the left.

Yup, I’m finally ready to re-launch my Sioux Rock Falls Short Story, Burning Moose.  This was the first of a series of stories that appeared in Storyteller Magazine between 2002 and 2006.

Yes, re-launch.  It’s been up there on Kindle for months, but friends and fellow authors who purchased it warned me that despite my best efforts, the formatting was corrupted.  There were no paragraph indents at all, which is really challenging when reading fiction.

This week I’m going to put up a detailed how-to menu item for those who want to e-publish well-formatted shorts or novels.  This may sound dull, but in the very crowded indie e-publishing industry, authors will need to stand out from the junk.  Just like with submissions to agents and publishers, the first thing that can get you tossed in the trash is a sloppily formatted story.

I certainly don’t want to lose sales because a reader checked out a sample on Kindle and then didn’t purchase my story because the formatting looked amateurish.

This is going to be fun!