Why We Launched William Deverell’s Kill All the Lawyers 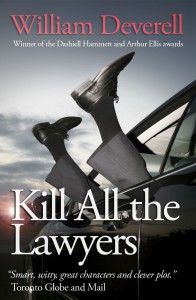 This will not be recorded in the annals of publishing history as a pivotal moment, and yet William Deverell’s decision to jump into eBooks indicates a fundamental sea change.  More established authors every day are discovering that the barriers to distribution of their words have crumbled and that publishing houses are not the only way to reach the reading public.

To Blog or to Write: That is the Question

All the great success stories on Amazon–from Amanda Hocking to John Locke–have one thing in common: multiple books.  Joe Konrath says that writing multiple books is the most important thing a writer can do to advance her/his career.  John Locke also warns that there is nothing more frustrating than to have a product’s sales take off and not have anything else for an interested customer to purchase.  In the case of novels, it means that mountain you’ve climbed to promote one novel will have to be scaled again a year later for the next novel.

So I have to examine whether blogging, twittering and promoting is time well spent when I only have one novel and one anthology (in very different genres) up for sale.  What if I get lucky and people start buying Vampire Road in big numbers rather than the steady trickle of sales I get right now?  They might be ready to read more, and if there is nothing to buy until next year, they might forget my characters and move on to something else.

Time pressures are different for everyone.  I write quickly, but I can’t write a book in fifteen days like Amanda Hocking.  My kids eat up a lot of time in the evenings and on weekends, and I’m not going to short change them.  That’s a choice I’ve made.  But if I’m to finish The Book of Bertrand by mid-October and get it off to my editor, something has to give.

So I haven’t been blogging or twittering for the last couple of weeks, but I have been writing.  It’s been fun.  My editor and a couple of reviewers want to know more of the back story to Vampire Road, and The Book of Bertrand delivers.  The progression from computer nerd to saint is a torturous path with euphoric highs, desperate action and unintended consequences that will reverberate down the century to Vampire Road.

But I’m not stopping there.  There are four novels in this series, and I’m going to try and get as many of them up in the next few months as possible.  It’s a lot of work, but I believe the best thing I can do to promote Vampire Road is to have all the other novels in the series available for purchase.

I like blogging though, so I will try to post quick notes on Fridays, but I won’t be posting three of four times a week.  I’ve had to decide whether I’m a blogger or a writer, and novels are my preferred form of expression.

So I’m logging off to write, but I will keep you posted.  See you next Friday.

The Verdict on Amazon Gift Cards

Promoting a novel through give-aways is a great idea, but I learned a lesson recently.  I was heading to the Bloody Words Mystery Convention in Victoria, mostly to hang out with a bunch of fun-loving authors.  But I knew there would be lots of mystery readers there too, so I decided to give away some e-copies of my anthology, Summer of Bridges, because it has an award-winning mystery short story, Railroaded, among the other Sioux Rock Falls stories.

So I went to Amazon and ordered fifty gift cards and took them with me along with a fistful of postcards featuring the anthology’s cover.  I’m not pushy, so I only handed out the gift cards to people who said that they were very interested.  I also made sure that they either owned a Kindle or were comfortable with downloading the Kindle app for their computers.

Then the real mystery began.  The week after Bloody Words my novel, Vampire Road, began selling copies but Summer of Bridges showed no spike at all.  What the heck?  What were those mystery lovers doing buying a vampire novel with their gift cards?

Today I checked the status of the gift cards with Amazon and discovered that not one single, solitary, gift card from Bloody Words has been redeemed.  The sales for Vampire Road, White Metal, Railroaded and the others all came from book-lovers surfing Amazon.  None of those sales came from my gift card promotion.

I still think that gift cards can be useful, but next time I’ll say, “Show me your Kindle and I’ll give you an e-book.”  I’ve done that twice since Bloody Words with better results.  Both fans had Kindles and both used their gift cards.

So the verdict: the Amazon gift cards are a great way to introduce people to a novel.  Just don’t give them to people who may not be comfortable downloading the Kindle app or buying a Kindle.

Amanda Hocking, the  indie e-pubbed bestseller, credits book bloggers for taking her from a minimum-wage, dead end job to millions of books sold through Amazon and Smashwords and a seven-figure contract with St. Martin’s Press.

This news has started an avalanche of review requests by self-e-pubbed authors into book bloggers in-boxes.  So much so that Big Al, of Big Al’s books and pals, has stopped accepting unsolicited review requests.

Big Al says:  “As of May 17th.  We are currently NOT accepting unsolicited review submissions until we catch up with evaluating those already received.”

I’ve heard many editors, authors and agents express concern about the e-publishing industry, and the biggest worry seems to be about who will be the gatekeepers of modern publishing.  Big Al’s announcement proves that book bloggers will be covering one gate.  How can I tell?  It just slammed closed until further notice.

I’m Selling in the UK

I was checking my sales report on Amazon to see if my efforts at  Bloody Words had produced a bump, but what caught my attention was a new report button for sales in the Kindle UK store (and another for the Kindle DE store in Germany)

Just for fun I gave it a click and discovered that I’ve actually started a trickle of sales in the UK.  Even one of my short stories sold on that side of the pond.

Why is this so exciting?  I don’t know anyone in the UK.  These sales are a tribute to cover art (thanks M. Custode) and good openings to the stories–because that’s the only way people in the UK can judge them.  Amazon allows readers to read the first several pages for free.

My efforts at Bloody Words did cause a little bump in sales for Summer of Bridges, my coming-of-age anthology of short stories that first appeared in Storyteller Magazine.

But here’s the really weird thing: Vampire Road, the young adult, violent, vampire novel has seen an even bigger jump in sales over the weekend.  I didn’t push Vampire Road at Bloody Words because this is a convention of mystery readers–many of them with grown children–who would have little interest in a YA novel.  I’d be doing them a disservice to try and sell it to them.  I pushed Summer of Bridges because the Sioux Rock Falls stories are light-hearted Canadiana, and one of them is a mystery.

So what demographic started buying Vampire Road over the weekend?  I guess the obvious answer is younger people who like vampire novels.  It’ll be interesting to see where sales go once I really get marketing.

If you were wondering: no sales in Germany so far.

Side Note: For the authors out there who are waiting for a blog on how to format and put up e-books, it’s in the draft stage.  It’ll be up this week.

How to Publish Your E-book

I’m at the Bloody Words Mystery Convention this weekend in lovely Victoria, and I’ve been surprised at how many authors, both newbies and established, have come to me asking about how to format and publish their e-books for Kindle and other platforms.

The established authors have figured out that their back lists are worth more than the 15-25% e-book royalty most publishers are offering, and the newbies just want to get their novels out there for the world to judge.

So starting this week, I’m going to do a series of articles on how to format and upload your novel for Kindle, Smashwords, etc.  It’s pretty simple, except for the clickable table of contents, and even authors who are technophobic don’t need to worry that it’s beyond them.

I’m also open to questions and am willing to help.

I’m off to a panel now, so the first “How to” article will appear tomorrow, and I’ll put up a menu item for anyone who wants to reference it in the future.

Author Barry Eisler shocked the publishing world when he walked away from a $500,000 deal with St. Martin’s Press so that he could self-e-publish his next John Rain novel.

Now Eisler’s tacked the other way, signing with Amazon’s new mystery/thriller imprint Thomas and Mercer.  Eisler says the advance was comparable to St. Martin’s except that the e-book royalties are significantly better. T&M will publish both print and digital versions.

Publishers are going to have to accept that offering authors a 25% royalty on e-books just isn’t going to cut it when they can get 70% from Amazon–especially when e-books never go out of print, so the contract could last until the novel goes into the public domain.

I’ve heard the argument that publishers simply can’t make enough to cover their overheads on e-publishing, and I sympathize, but times have changed.  Publishers are going to have to find a way to lower their costs, because it’s not just John Locke’s 99 cent novels (or my anthology, or my novel) that will sink them.  They’re going to start losing talent as well.

It’s getting interesting out there.  We have agents like Richard Curtis now filling the roll of e-publisher, and retailers like Amazon launching print and e-pub imprints of genres like romance and mystery.  It’s a strange new world when an author’s agent or his retailer can become his publisher. 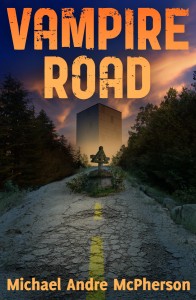 Warning: Don’t expect to find sexy, conflicted vampires in love.  This is a man’s novel.  Okay, women who like to read about women kicking butt will like it too.

Except Amazon needs a couple of days to digest it.  No worries.  I’ve got the anthology of Sioux Rock Falls stories to put up, and I’ve got about three tons of marketing to do before I fly out to Bloody Words in Victoria–where I have to hand out an award and participate in a panel.

Not to mention Barry Eilser has rocked the publishing world again, but I’ll save that for tomorrow.

Coming Soon to a Kindle Near You

My post-apocalyptic vampire novel, Vampire Road, will launch Monday, May 30th.  It will only be available for the Kindle platform via Amazon at first, but all other formats will follow.

If you want a fast-paced exciting read, this is your novel.  It’s about brave people fighting to survive against all odds.  Unfortunately, they spend almost as much time fighting each other as they do fighting their real enemy, but that’s what human beings do when stressed to the breaking point.

Stay tuned to find out how you can win a free download.