Hero in My Own Mind 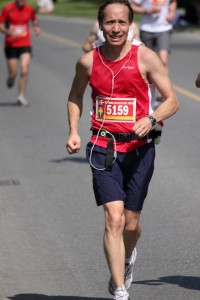 Infection was not a predicted side effect. I knew that by running two marathons in less than one month I was asking for trouble, but I didn’t expect a brush with flesh eating disease.

Okay, so far it looks like I don’t have flesh eating disease, but I saw the look of worry on my doctor’s face the day after the marathon when he discovered that the leg pain I developed during the marathon wasn’t a muscular injury but a bacterial infection. Nutty.

How did this happen? I do remember banging my shin once in early May when I was prepping for the Toronto Marathon, and apparently the cut or abrasion doesn’t have to be visible in order to allow the little critters a path into one’s flesh.

All I know was that training runs between the two marathons had to be curtailed because of a pain on the front right side of my right leg–something I self-diagnosed as chronic anterior compartment syndrome. Isn’t the internet a wonderful and dangerous place when it comes to medical information? I should have checked with my doctor because I could have saved myself a lot of pain.

It started at 6 kilometers, that ache in my leg. By 10 k I knew I was in trouble, and by 22 k I had serious doubts about whether I’d even finish the marathon. That’s when I became the hero in my own mind, the lead character in one of my novels, suffering through adversity until the end of the story. I know, stupid. I should have stopped at a medical tent and asked for a ride back to the start. My brother-in-law had given me instructions for a couple of short cuts that would allow me to bail from the course and head straight back to his place, but in the haze of pain I couldn’t remember.  So I battled on.

But while my characters were great inspiration, I began thinking of real people who struggled on through great pain. My wife had three children the natural way, and I watched her fight through labor bravely each time. I once joked with her that running a marathon is the closest a man can come to the endurance test that labor is for women, but she reminded me that there is one big difference: a man can stop running. We can just give up on a marathon. My wife is a hero.

I also thought of my dad who, desperately ill with cancer, would refuse morphine when I was coming to visit so that he could be alert when we chatted, even though it meant great discomfort for him. My dad was a hero.

So how could I not finish the marathon in spite of the pain? It was just pain and I could push through it. I was lucky, because the body can fail no matter how positive the runner.

During the marathon I may have been a hero in my own mind, the protagonist of one of my novels, the star of my own film, but the people who truly got me through that race were the real heroes in my life.

thankfully no damage done to your body!